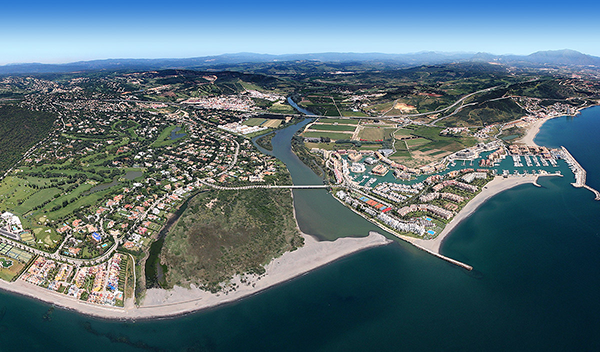 Sotogrande is located in the municipality of San Roque, Cadiz, Spain. It is the largest privately owned residential area in Andalusia. Established in 1962 by Joseph McMicking. Its geographical position, in southern Spain provides a wetter and cooler climate, because of proximity to the Atlantic, just beyond Gibraltar. Sotogrande is known for its laid back pace of life, which makes life easier for celebrities, millionaires and peaceful life for families. Even though it is not as pulsating as its eastern neighbours, this fact does not fade its own allure. In this destination of Costa del Sol, there are a lot of things you can do, such as playing sports, enjoying beach clubs, tasting delicious food in marvelous restaurants, yachting and sailing. 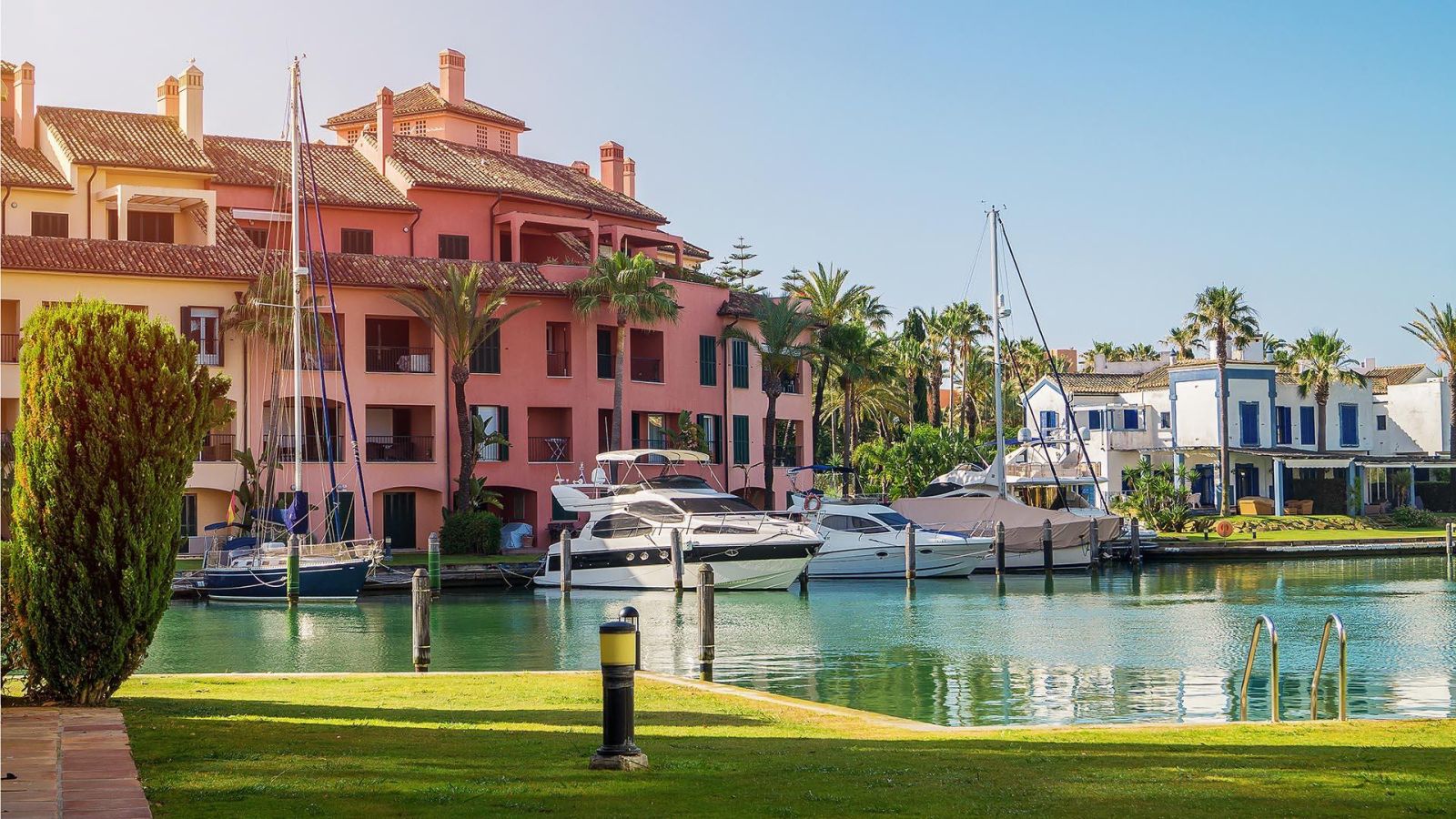 Hence, it is great a place for golf lovers, heaven for sailing enthusiasts and fans of polo sport as well as for the players. On the other hand, restaurants are another charm, because you will be impressed by the tasty diverse food and the view. The portside restaurants are so plentiful and in addition form the social hub of the urbanisation, by landing a cool and cosmopolitan atmosphere each nightfall. The glittering water, the gently bobbing yachts, the warm and fragrant air wafting over from northern Africa create a delightfully romantic scenery. In Sotogrande you have the chance to see high mountains and forests Alcornocales Natural Park to the north that is one of the most beautiful parts in Spain. If you are looking for a peaceful lifestyle for family, this is the place you need to be, since it fulfils all the needs.

This lovely place offers marvellous beach clubs. Each of them has their distinctive way of attracting people. Thus, matchless climate, diverse gastronomy and outstanding nature make you fall in love with the beach clubs of Sotogrande. For that reason, don`t worry, beach happy. Sotogrande’s famous beach clubs are:

Sotogrande is a wonderful destination for diverse gastronomy.
It offers an endless choice of cuisines from refined Mediterranean to Italian, Argentinian, Thai, Japanese, Indian, French and Belgium. Hence, Sotogrande satisfies all food lovers by serving all kinds of dishes in a dazzling view, since restaurants can be found in and around the area. The very first restaurant in Sotogrande was El Gaucho Restaurant and opened in 1985, which is well-known for its Argentinian steaks. Thus, if you are a meat lover El Gaucho it is ideal option for you. This restaurant has opened the doors of a lot of famous people starting from princes of British Royal family to King Baudouin of Belgium, also actors and sportsmen. As mentioned earlier Sotogrande offers a diverse cuisine therefore here is the list of top restaurants in this place:

Sotogrande is privately owned residential, thus the possibilities of enjoying your daily activities without interference by crowded places is what characterizes it. It is tremendous covering area of 20 kilometres besides being rich in green; hence hills and forests, it has the famous port of “Puerto Sotogrande.” It is due to this port that people can enjoy yachting and sailing. Puerto Sotogrande provides the most picturesque views for yachting purposes combined with privacy. Whereas, sailing is quite the opposite, as people tend to enjoy Puerto Sutogrande’s depth ground variety to perform their activity in the best possible manner.

A famous yacht club in Sotogrande is The Real Club Maritimo Sotogrande which is a water sport centre that was born in 1980s from a high local demand for sailing and training facilities. Its founding has made a major impact on making Sotogrande the splendidly well-furnished marine it is in our day. Another advantage from this yacht club is that besides organizing events, it provides sailing and diving school too.

Sotogrande it is a great option for living as it is considered a family friendly resort. The life in this place it is described as discreet, besides of playing sports and having fun at the beach, education is another charm of this place. Thus, moving in Sotogrande gives you a lot of opportunities to enjoy life in many aspects, because it gives you the comfort of having many venues that are kid friendly as well. Education is the very first thing that cross our mind for our precious ones-children. In Sotogrande the quality of education is high-ranking for all levels, from kindergartens to universities.  The schools are in and around Sotogrande.

Since, Sotogrande is populated with international residents, there are bilingual schools like

Sotogrande is the best destination to escape daily life and play some golf on great weather and beautiful surroundings. Having approximately 325 sunny days each year, it makes this place the ideal destination for golf lovers. Each of these golf courses have their uniqueness, regarding their surroundings. The most famous one is Valderrama, this golf course was established in 1974 by the designer Robert Trent Jones Snr. Originally Valderrama was known as “Sotogrande New”. There are 18 holes which all of them have a unique name. This golf course is the venue of a lot of important golf competitions in Europe. For the very first time the 32nd Ryder Cup Matches were held at this golf course, located in Sotogrande, continental Europe.

The Royal golf club of Sotogrande

Sotogrande it is considered as a land of sports, in this place residents start their day by playing sports. Polo it is a sport that came to Sotogrande by two Filipinos Joseph Rafael McMicking y Ynchausti and his wife Mercedes Zobel de Ayala y Roxas. The first polo field known as The Beach Ground (the beginnings of Santa María Polo Club), was built in 1965 by Enrique Zobel de Ayala  the nephew of Mercedes. Location of Sotogrande and its geographic position makes a suitable land for polo.

The most famous polo club in Sotogrande is Santa Maria Polo Club, which is one of the best clubs in the world with seven polo grounds, four of which are World Class. Even though not everyone can afford playing this “game of kings” but watching is free. Summer is the season that polo reaches its peak, specifically month August, during this time of the year over thirty teams with the best players and thousands of horses gather to play under Andalucía’s brilliant climate. This massive number of participants attracts well recognized faces starting from European Royal Families, people from business and fashion world and elite sportspeople. After watching polo you have an eager to learn more about this sport practically. So if you want to ride the horse just like the players in the field, then Santa Maria Polo Club offers polo academy which provides courses to suit complete riding along with polo skills. Santa Maria Polo Club says that “Our Club is, therefore, one of the most emblematic places in Sotogrande and the Spanish Costa del Sol, and a benchmark for exclusivity and glamour”.

Click one of our contacts below to chat on WhatsApp

Social Chat is free, download and try it now here!